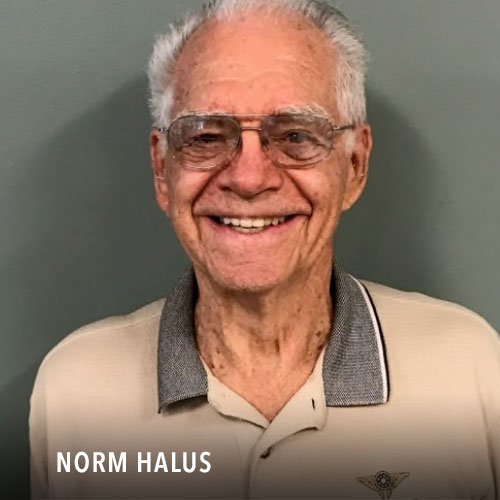 I am proud to nominate Norm Halus for the 2022 Hall of Fame. A long-time Vista resident, Norm has made a significant impact on the quality of life in Vista's neighborhoods and parks, and on seniors and community groups. He demonstrates Exceptional commitment to volunteerism by helping with special project or ongoing activities, serving as a role model by inspiring others. Norm volunteers many hours in the community and for the City of Vista. He seems to know everyone, greeting them with a smile and a factoid about the city. He is active, positive, and cheerful, bringing people together to make Vista a better place to live.

Norm married his high school sweetheart, Martha in 1952 and pursued his engineering degree at Purdue University. They raised their family and then retired to Vista in 1989, becoming active volunteers in the community. Since 1992, Norm has served on a City of Vista Commission. Following his wife's death in 2008, Norm continued adding to his daily volunteer activities with the city, his homeowner's association, and on the Scripps Community Advisory Board. In 2013, Norm
received the 2013 Vista Chamber of Commerce Educator of the Year Award.

Norm continues to make a positive impact on Vista and what sets him apart, is his love for the city, knowledge of its history, engagement with its present, and his shared vision for its future. Visitors meeting Norm always walk away knowing more about the city's many amenities and activities. Passionate about improving the quality of life for residents, he has touched numerous facets of City Hall's policies and decisions on traffic, planning, current and new parks, and recreational opportunities. Norm recently served on the McClellan Senior Center's Nutrition Committee and has volunteered at the Center for many years, shuttling seniors back and forth from the parking lot to the Center's front doors.

Norm's passion for volunteering, involvement in the community, and ability to give back are only second to his love for his family. He is truly an asset to our community, and I am honored to nominate him for this significant recognition.