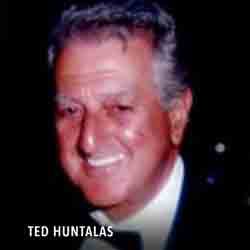 Ted Huntalas was born in the original farmhouse on the family ranch in Vista. That ranch later became known as Rancho Minerva, named by his father for the goddess of wisdom. Ted's birth was attended by a midwife, Mrs. Lorenza Serrano Marron, a granddaughter of the man who accompanied Father Serra to California. The Spanish style adobe home on Rancho Minerva was built in 1933 of bricks made on the property by the contractor. Ted was raised in the home that now serves as the Vista Historical Society Museum.

Ted was the youngest son of Nick and Bessie Huntalas who came to Vista in 1911 to start farming. They acquired a 420 acre tract of land that had originally been part of a Mexican land grant that covered the North County region.

Ted attended Vista High School and took pride in being a member of the first senior graduating class. Following his school graduation, Ted served in the US Army for two years during WWll in the Philippines. He was discharged in 1946 as a Staff Sergeant and then attended UC Berkeley. After college graduation, Ted returned to Rancho Minerva to manage the family citrus ranch.

Ted was witness to the development of the North County agricultural region that transformed from dry farming to more profitable fruit and vegetable farming with the advent of electricity and water in the 1930's. The Huntalas family was instrumental in forming the Vista Irrigation District that brought the first water to the new rural farming areas in Vista.

Rancho Minerva served as a hub of agricultural development for the burgeoning citrus and avocado industries in the North Country. The ranch grew during 1950's and 1960's to include over 5,000 trees and produced 200,000 pounds of annually of avocado, orange and lemon produce.

Later with the continuing growth of Vista, Ted was active as a licensed realtor and land developer. By funding the infrastructure improvements along Foothill Drive, including the original acreage that Rancho Minerva School is built on, he made it possible for housing to develop.

Throughout Ted's entire life, he was a very active, energetic person who embraced life to the fullest. He approached everything in life with a smile on this face and instilled the values of hard work and perseverance to all around him.

Ted was a frequent donor to the Vista Historical Society, and honored by being made a life time member. Ted was a member of Greek Orthodox Churches, the Hellenic Cultural Society, and a lifetime member of the AHEPA and th Pan Arcadian†Greek philanthropy organizations.

Ted retired in 1993 after 70 years of hard work, to enjoy his grandchildren and tour the world with his beloved wife, Irene. All three of his children graduated from college and came back to the area to pursue their careers and raise their families. Ted spent many happy years surrounded by family and loved telling his grandchildren stories about the ranch and the history of Vista.