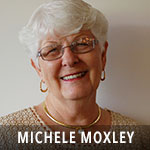 Michele moved to Vista in 1951 with her parents Mack and Loranne Gardner, sister Karen and brother Tom.

She graduated from Vista High School in 1958 and Palomar College in 1960 and began her career in banking at Oceanside Federal Savings & Loan.

She worked at Home Savings which became Washington Mutual, from 1981 until her retirement in 2007.

She joined the Vista Historical Society in 2008 and has held the position of Treasurer since 2009.