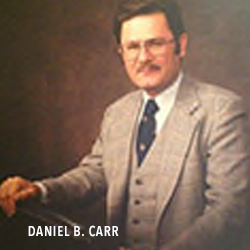 1939-2010
Daniel Bennett Carr was born in San Diego. His father worked in the Foreign Service so he was raised primarily in Latin America before moving to Chula Vista at the age of 16. At this young age, he worked at Bear-ing Engineering in San Diego in order to help provide finan-cial support for his family. Daniel married Sue Ann Crabbe on May 16, 1959 in Chula Vista.

He was a resident of Vista for forty years. He moved his family to Vista from Chula Vista in 1962 and resided in the community until 2002. He was an honorable and successful business owner of Carr's City Auto Parts, established in 1962. He later pur-chased Vista Auto Parts and established North County Warehouse in the City of Vista. Carr's City Auto Parts was one of the first parts stores to offer delivery service to auto repair shops, gasoline stations, and many other establishments such as Golden Arrow Dairy and Mc Mahan's Furniture Store, who both had their own small fleet of delivery trucks, as well as Pro-horoff's Poultry Farm.

He would often get up in the middle of the night to help a customer with a broken down vehicle so that they could continue on their deliveries and/or travels as needed. Carr's City Auto Parts started at 341 N. Santa Fe Avenue. He then built a new and bigger store with a ma-chine shop at 223 W. Vista Way. When the business out-grew that store he purchased the old Safeway Store/Drew's Appliance Center at 420 S. Santa Fe Avenue and moved it there where it continued to grow. It was here that he estab-lished North County Warehouse.

In the late 1960's or early 1970's, he also bought Vista Auto Parts. He built a new and larger building on East Vista Way with a machine shop for this business as well. He later sold Vista Auto Parts to Mr. Henry Boothman, a machinist who had worked for him for many years. Daniel B. Carr, was an active member of Vista's Optimist Club serving as president from 1965 - 1966. He was an effective and respected Planning Com-missioner, serving the City of Vista in this role from 1970 - 1978.

In 1978, he was elected to Vista's City Council with the help and support of many other community mem-bers such as John M. Cosh, Terry Hensley, Frank Tiesen, Betty Minor, Orbee Mihalek, Ken Annin and Gil Duran, who were all members of his election committee. During his term on the City Council from 1978-1982 he served as mayor of Vista from 1981-1882 and served his time in office with distinction.
He was one of the original founders of the Moonlight Amphitheatre in Brengle Terrace Park, successfully heading up the committee to get the original grading done by Mr. Carl Pinamonti.
He was an avid hunter and tennis player. He was a pilot and enjoyed flying his own airplane.

He never aspired to be a politician. However, be-cause he chose to raise his family and start his business career in the city of Vista, he believed that he had a duty to work for the betterment of the city that gave us so much. He knew he could do good work in the political arena of the city. He was extremely grateful for all the opportuni-ties Vista had provided for us and was honored to serve his beloved "City of Vista" in anyway that he was able.