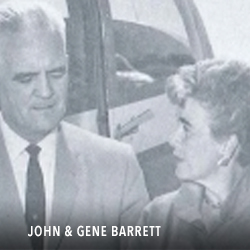 In 1939, John and Gene Barrett and their two children moved to Vista, a quiet little town with a beautiful climate and friendly people; a lovely place to raise a family. John Arthur Barrett and Harold Sanborn operated the "Barrett and Sanborn Market" on East Vista Way. Later, they opened a larger market at 306 South Santa Fe Ave. at Eucalyptus Ave. The produce department was operated by Ted Minge; the bakery by Roger MacDonald and his wife, Lois; the liquor department by Bert Baletto.

In 1942, "Barrett and Sanborn Market" was changed to "Buy and Save" and the business was incor-porated. John and his wife, Gene, enlarged the Vista
"Buy and Save" and branched out, establishing other "Buy and Save" markets in Fallbrook, Carlsbad, Ocean-side, Escondido, Encinitas and other points in San Diego County. Their central warehouse was in San Marcos. Their son, Richard, and their daughter, Bar-bara, became a very important part of "Buy and Save's" growth.

John Barrett was on the school board; Richard played football for Vista High School, and Barbara Barrett was drum majorette for the band. Gene Barrett did her share working for the P.T. A. In 1945, John learned to fly an airplane and Gene took lessons. They became the flying Barretts, attending many grocers' conventions, looking for better ways to serve the public with bigger and better "Buy and Save" markets.

In 1945, their home, El Adobe Casa, was built on what is now East Sunrise Drive. The adobe bricks were made from local soil, molded and dried in the sun. John and Gene designed the adobe, with much of the work done by John and son, Richard. Lupe Lara and Son were the builders.