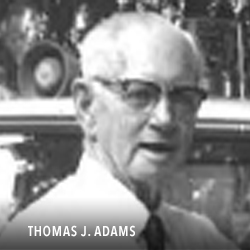 Thomas J. (T.J.) Adams was the second longest serving member of the Vista Irrigation District (VID) Board of Directors, second only after “Mr. Water” himself, Hans Doe. Mr. Adams served on the VID board for 25 years, from March 1949 to July 1974. It was during his 25-year tenure on the VID board that Vista became incorporated as a City in 1963. The population of Vista grew from 8,300 in 1949 to 39,000 in 1974. Mr. Adams was seated as chair of the VID board of directors in 1954, where he remained chair until he passed away in office in 1974. It was through his leadership that the district was able to accommodate the tremendous population growth with all of the necessary facilities and water rights for the people of Vista.

Adams, a native of Louisville, Ken., had made his home in Vista since 1946, coming here from Pittsburgh, Pa., where he had been U. S. Steel's chief metallurgical engineer for 15 years. Adams had owned an avocado grove on Phillips Street when he first came to this city.

In 1951, as a result of a five-year drought, the level of Lake Henshaw (the primary water source for Vista), vir-tually dried up, going from 120,000 acre feet to only 200 acre feet. In response, VID dug 31 wells at its Warner Ranch watershed, and began pumping water into Lake Henshaw. The need for water for the people of Vista continued to grow with the increase in population and the district began to eye other sources, but few options were available to such a small agency.

In 1954, a special election was held in which the people of Vista voted to join and receive imported water from the San Diego County Water Authority. In 1961, the district built its new headquarters on Connecticut Avenue to combine the field and office operation in one location to bet-ter serve the VID customers. During Mr. Adams’ tenure as president of the VID board, to further accommodate the City’s continued growth and demand for water, the district began planning to build a water treatment plant jointly with the City of Escondido. This plant was completed shortly after Mr. Adams’ death and allowed all the residents of Vista to receive fully treated water for the first time.