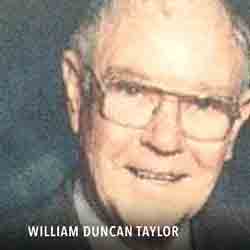 William “Bill” Taylor was born June 23, 1912, in Redondo Beach, California, and went to school there. He earned a Bachelor of Science degree in forestry from the University of Idaho. While at Idaho U he spent three summers working for the U. S. Forest Service. In his last year, he took an 8-hour assembled civil service exam entitled Junior Range Examiner, which led to his career.

Bill spent his working life in various jobs for the Federal Government. In 1939, he married Mildred Anderson. They are the parents of two children. In mid-1941, he was assigned as work unit leader to a newly formed Soil Conservation District in San Diego County. His job eventually led, in November, 1948, to a 27-year career in Natural Resource management at Marine Barracks, Camp Pendleton.

His initial title was Ranch Manager. The position was fraught with adventure and innovation. The Marine Corps had no rules or precedents governing his duties, and he had to make them up himself. In 1971, he became the first civilian Director of Natural Resources, following seven colonels who had held the job.

There were numerous memorable highlights which made the career an adventure, such as: In the 1960's he was the Commanding General's represen- tative as landlord during construction of the San Onofre Nuclear Generating Station and the 1-5 Freeway through the base, and he received accolades from both agencies for his assistance. In 1973, he placed a dozen American bison in the Vallecitos, a high meadow area of the base. These were surplus from the San Diego Zoo that no other zoo wanted.

Bill retired from the base on January 15, 1976, but remained active. In 1977, he became a member of the board of directors of the Bueno Colorado Water District, parent of the Vista Irrigation District. He was elected to the Vista Irrigation District board in 1979, and served there until 1993. Also, he was on the board of the San Diego County Water Authority for six years, ending in 1993. He iwas a longtime member of the Vista Rotary Club.