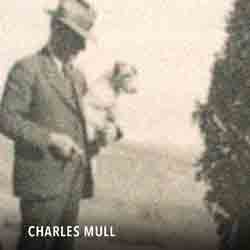 Charles H. Mull Sr., was an early-day Vista Irrigation District engineer-manager. He also was prominent in real estate development. He developed Mull Estates, which today covers most of Anza Avenue and surrounding streets.

The old Mull homewas razed in 1982 to make way for an extensive subdivision. He was the first chairman of the Vista Community Association in 1938 and was active in building of the Vista Recreation Center on Recreation Drive.