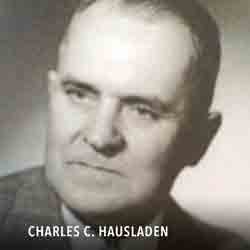 Charles Hausladen was born in Minnesota. He came to Fresno, California, as a young man and worked in the grape vineyard around Fresno and Delano. He, his wife Mildred and family came to Vista in 1927, where he first worked for the Phillips-Hambaugh Company, one of Vista’s early developers, who laid out some of the first street. Philips Street and Hambaugh Way are named for these two partners.

Over the years, Charles Hausladen was known as the man who built many of Vista’s streets. At the time the Hausladen family arrived here, there were about 350 people in Vista. There was a general store, a post office and a hardware store.

In the late 1920s, Hausladen bought a monoplane and used it and another leased plane to get around in his work. He manages the Chicago Tribune large avocado planting on “Tribune Hill” near Pechstein Dam for several years. He helped form the Vista Volunteer Fire Department shortly after arriving here.

An enthusiastic supporter of his community, he used his construction equipment to level and work the ground for the construction of the Vista Recreational Center in 1940. He also prepared the surface for track meets at the school and for ball games at the Recreation Center. He was known throughout the area as a civic minded and dependable citizen.

He was called on to fill many varied positions, all of them serving to make our area a better place in which to live. Mr. and Mrs. Hausladen were Honorary life members of the Vista Historical Society, Inc. They were the parents of four children.