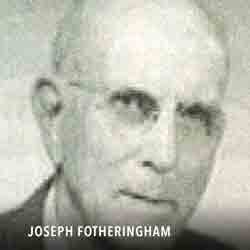 A land specialist and first Mayor of Vista, Joseph H. Fotheringham was born February 22, 1887, in Glasgow, Scotland and came to the United States at age five.

During his 44 years in Vista, he held a variety of civic posts, including the Chamber of Commerce and U.S.O boards. He was a charter director of the First National Bank of Vista; president of the Downtown Property Owners’ Association; elected director of Tri-City Hospital in 1957 and remained a member of that board until 1969.

He was a Vista city councilman and first mayor upon the city’s incorporation in January 1963. He was also a member of Local Agency Formation Committee (LAFCO); president of the San Diego County Division of the League of California Cities; founding member of the Kiwanis Club; past patron, Star of Vista 556 Order Eastern Star; a 32nd degree Mason; and a past president of the Board of Realtors.

He resigned as mayor of Vista in September 1965 and was named president of Tri-City Hospital Board on February 26, 1966.