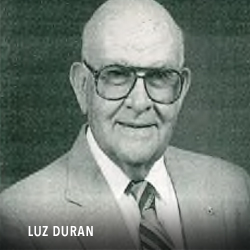 Luz Duran came to Vista with his family in 1925. Luz and his brother, Tony, formed Duran & Duran and built many of Vista’s major buildings, including the Elks Lodge, the Avo Theater, the Optimist Club, and many family homes.

Luz served his community in numerous ways. Among his affiliations were the Knights of Columbus and the Hispano Club, and he was a life member of both the Optimist Club and the Vista Historical Society.