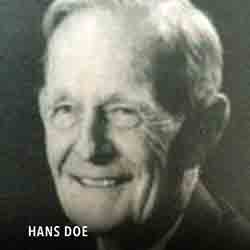 Hans Doe was born in Norway. His family moved to Canada in 1910. He attended the University of California at Berkeley, studying engineering, and becoming a United States citizen in 1927.

Joe and his wife, Margaret, made their home in Milwaukee until 1946, when they visited Margaret's parents in Vista. They promptly moved to Vista and owned and operated an avocado and macadamia nut ranch.

He was elected to the Vista Irrigation District board of directors in 1951 and later to the board of a Bueno Colorado Water District. Known as “Mr. Water” he served on the most influential boards and committees in the California water industry, including the San Diego County Water Authority and the Metropolitan Water District to Southern California, from 1956-1988.

He was the only person to serve two terms (four years) as president of the Association of California Water Agencies. His many statewide accomplishments included appointment to two terms of the State Soil Conservation Commission under Governor Goodwin J. Knight, president of the Resource Conservation Districts Association and chairman of the Southern California Water Conference for ten years. As one of the organizers of the Agua Buena Soil Conservation District, Doe helped promote them and build the flood control channel it protects Vista against periodic flooding.