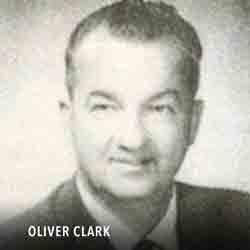 A native of Iowa, Oliver Clark and his wife, Helen came to Vista in 1941. He started Clark’s Floor Coverings, Inc, in 1946. He served 22 years on the Vista Irrigation District board of directors.

He was also a director of Chartered Bank of London, California Division, from 1964 to 1980. He was a member of the Vista Historical Society and several other organizations. He and his wife had three children; Carol Anne, Oliver R. Clark Jr., and Alan Lee Clark.