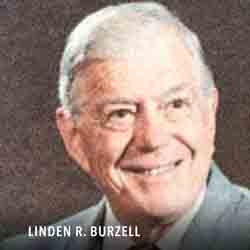 Linden R. Burzell began his career in the water industry as a young Navy Ensign in 1945 when he was assigned to assist the resident officer in charge of administering construction work on the first San Diego Aqueduct.

He joined Vista Irrigation District as its District Engineer in 1946. By 1951, he was general manager and chief engineer. Among the many projects that Burzell brought to completion while at VID was the covering of the original 12 miles of open flume that brought water from Lake Henshaw via Lake Wohlford to Vista. He expanded and improved the infrastructure serving the communities within VID’s boundaries, which were moving from an agricultural base to residential and commercial uses.

In 1964, he left to assume his new position as general manager and chief engineer of the San Diego County Water Authority. Burzell returned to the VID in 1992 as a member of the Board of Directors. He worked at the policy level to maintain VID’s high standards. He served as the Board’s president in 1996, 2001 and 2006.