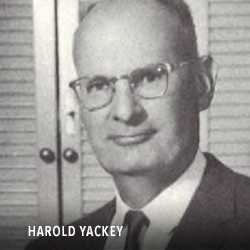 Following deactivation as a Lieutenant Com-mander in a Naval Construction Battalion during World War II, Harold Yackey was appointed as Engineer/Manager of the Vista Irrigation District (VID) in May of 1946, shortly after the District purchased Lake Henshaw and Warner Ranch from the San Diego County Water Company.

r. Yackey was born in St. Louis, Missouri. He was a graduate of University of Illinois with additional education at the University of California and Luis Obispo College. His identical twin brother, George, also lived in Vista.

Mr. Yackey took over as Manager of VID in a period when the system was in very poor condition due to shortage of materials for pipeline repairs and replace-ments during World War II. One of his first tasks was to solve the very high water losses experienced during transit from Lake Henshaw. He solved the problem by lining the siphon sections with cement mortar in the late 1940's. Yackey was also instrumental in the cover-ing of the Vista Flume in the late 1940's, primarily to eliminate the infestation of caddis flies and also as a sanitary protection for the water during transit.

Another important achievement was Yackey’s implementation of the well program at Warner Basin, giving the District the ability to pump and put into use groundwater when it became obvious that the surface supply in Lake Henshaw would not be sufficient to meet the needs of the District.
Following his resignation in 1951, Yackey worked for a number of years in the water industry in the Los Angeles-Orange County area before re-tiring and moving back to Vista.

In 1967, Yackey was appointed to the Board of Directors for Division 1, and he served admira-bly until his death on June 22, 1979. Yackey’s engi-neering background, his vast experience in pipeline and water matters, and his actions and counsel were most helpful to the progress of the Vista Irrigation District as it emerged from agricultural irrigation to an urban water system. As a member of the Board, Yackey also represented the District on the Santa Margarita-San Luis Rey Watershed Planning Agency.