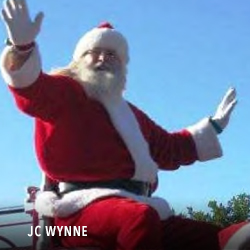 JC Wynne grew up in Vista and currently lives in the house that his parents bought when it was built back in 1969. His #1 mission in life besides his family has been giving back to his hometown of Vista, espe-cially it's next generations. He has so many titles; friend, coach, facilitator, volunteer and Santa but I call him dad. I may be partial but I'm sure there are more than a few out there who would agree that J.C. Wynne is the definition of Vista Pride.

Where to start... From a Vista Pop Warner and Vista American Little League coach to president to board member he helped build these youth sports organizations from the ground up which helped so many young kids in Vista develop discipline, team work and sportsman-ship.
He kept dreaming bigger and started the Vista Youth Sports Field Foundation with a group of vol-unteers funded by donations and helped launch the development of the amazing multiplex sports park off Bobier Drive. When Vista High School football wanted to get game film he facilitated a lift for the end zone. When they desperately needed a new field he reached out to NFL alumni to donate towards the project and even put a V in the end zone.

When Vista City Council announced they did-n't have enough money for a Santa Claus to ride the firetruck in the parade he volunteered and has been doing it for the better part of a decade and believe it or not, his only stipulation is that they give each kid a free picture with Santa afterwards.
When the City said they no longer had the funding for the Annual Easter Egg Hunt he gathered volunteers and donations to throw it for them and has been doing so for the last 6 years. He has even been gathering volunteers of late to help finish what the City didn't in getting French Fields up and ready again for spring ball.

His name graces the Honor V in the VHS quad, he was awarded the Have a Heart for Kids Award from the Boys and Girls Club of Vista, he was selected as the 2014 Person of the Year for the City of Vista and even had a day proclaimed J.C. Wynne day by the County of San Diego. He constantly aston-ishes me because I know that he would do anything to better this City for a simple high five or a smile which is why I think that he should absolutely be in the Vista Hall of Fame because he does it all for our community and not the fame.