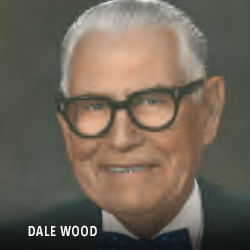 Dale Wood came to Vista in 1926, as the resident representative of Edwin G. Hart Development Company, which was a major developer of agricultural and commer-cial properties.

He was a member of the Vista Irrigation District Board of Directors from 1954 to 1973. A resolution in his memory, presented by Hans Doe, follows:

Born in Iowa, Wood was a veteran of World War I. He was a charter member of Vista Rotary Club, which was formed in 1936. He was a member of Royal Arch Masons of California, and a member of the American Legion.