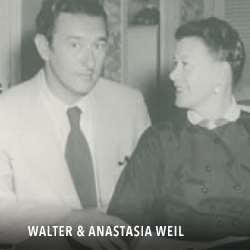 Dr. Weil and Anastasia Gardiner were married in London in 1940. He opened his eye clinic in Toluca Lake, Cali-fornia, where he practiced for over thirty years. He was on the staff of St. Joseph's Hospital in Burbank and was the first eye surgeon in the San Fernando Valley.

Dr. Weil, in addition to being proficient in several languages, was a talented musician, playing the piano, violin and guitar. He was a co-founder of Vista Historical Society, and both he and Mrs. Weil were charter directors of the organization.

Anastasia was a dedicated member of the Tri-City Medical Center Foundation. She offered artifacts to Mission San Luis Rey and was also a generous donor to Scripps Memorial Hospital.