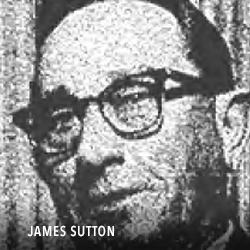 James W. Sutton, originally from Illinois, served on the Board of Directors of the Vista Irrigation District from March 5, 1935, until February 25, 1947. His 12 years on the Board was the longest tenure of any director in the first 40 years of the District's history. James Sutton was the President of the Board when the Vista Irrigation District purchased Lake Henshaw in 1946. He championed the purchase of the lake, which from that point on, secured a water supply for the growing community of Vista.

Upon Mr. Suttons’ retirement in 1947, the Board of Directors issued the following statement: "[We] have seen directors come and directors go, but [we] have never seen a director who gave more unsel-fishly of his time and thought to District affairs than you have these many years. As the years go by, Vista will enjoy the great benefit and advantage of owning its wa-ter system, which you helped to make possible."

James Sutton served on the Palomar College Board of Governors from 1954 to 1966, when he re-signed to take a position in San Diego to further his career as an insurance underwriter. He was also president of the Farm Bureau Center in Vista.