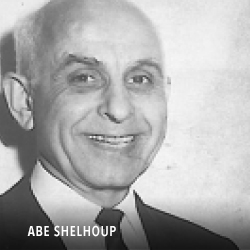 Abraham and Hayat Shelhoup, who lived in a large Mediterranean style home on a hill overlooking Vista, were both natives of Douma, Lebanon, where Abraham was born January 24, 1902. "Abe", as Vistans knew him, came to this country in 1920 to join his father, Mike Shel-houp, who had come to Brawley, California, some seven years earlier.

With his father he came to Vista in 1928 and they purchased a grocery store and butcher shop located in the Pechstein Building in the 100 block of East Vista Way, just east of Santa Fe Avenue. Adding dry goods, "Abe" and his father continued the operation of this market. The two worked together until 1936 when "Abe” bought his father's interest in the business.

"Abe" sold the market in 1938 and established a variety store. In 1941 he opened his well known Department Store at 236 East Vista Way (now 236 Main Street), where he sold only name brand merchandise and took great pride in the fact that he served second and third generation customers of some Vista families.

In 1948, Mr. Shelhoup built the Avo Theatre, where Vistans have enjoyed moving pictures throughout the years. The Avo has seen many civic gatherings also, such as the crown-ings of Miss Vista and some theatrical show-ings.

Hayat Shelhoup came to America in 1940, having lived for a time in Central America and Mexico. Abraham and Hayat's son, Kamal, holds a doctorate in Political Science from Claremont Graduate School, and is also an accomplished avia-tor. He has been selected to appear in the 13th Edi­tion of Who's Who in California.

Over the years he worked constantly behind the scenes to make Vista a better place. He do-nated the 286 trees that line East Vista Way; gave two fountains to the city, one at Vista High School, the other near East Vista Way and Indiana Avenue. He provided eight benches for the down-town area, and tables and benches in Soroptimist Park on North Santa Fe Avenue.

He said he enjoyed doing things for people, and many Christmas baskets were provided to needy families with no recognition being sought. While he shunned office holding, he was a guiding force in the city's development.
In addition to his flawless English, he spoke his na-tive Arabic, Russian, French and Spanish.