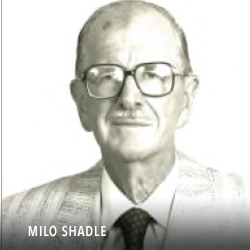 Milo Shadle moved to Vista in 1963 and practiced law here until his retirement in 1977.

He then went into real estate development. He was a past president of the Vista Chamber of Commerce, former chairperson of Santa Margarita YMCA, and former director of Palomar Family Service Association. He was listed in Who’s Who in the West and Who’s Who in American Law.