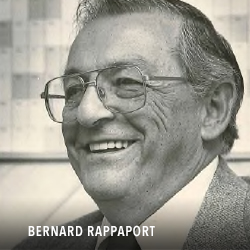 Bernard “Bernie” Rappaport, a veteran of World War II, his wife, Lenore, and three children; Gideon, Hannah and Sharon moved to Vista from Los Angeles in 1969. Before coming to Vista he was an engineer in the infancy of the semiconductor industry (before the invention of the transistor). Once he settled in Vista, he began to involve himself with the commu-nity in a variety of ways.

Bernie served on the boards of the Rancho Vista National Bank and the Vista Community Clinic. He also served on the San Diego County Grand Jury for a year.

During their 1990 – 1994 campaign to raise money for the construction of a new library, Bernie became actively involved with the Friends of the Vista Library. He was the chairman of the fund raising com-mittee and was instrumental in organizing the “Buy a Leaf” campaign that was very successful and continues to bring in money for the library.

When the State Li-brary Board was deciding what libraries to provide con-struction funds for, Bernie heard that the desperately needed Vista library was far down the list of priorities. He went to Sacramento and pleaded the case for Vista. Our library was made a priority due to his efforts. Thanks to his leadership, the funds were raised and des-ignated by the state library system so Vista was able to open a much needed new library in 1994. He continued to be an active member of the board of the Friends.

From 2005 – 2006, Bernie chaired the citywide campaign to pass Proposition L. This was the ¼% sales tax initiative that passed in November of 2006. This additional money provided the City of Vista with much needed reve-nue. The money raised funded two new fire stations, the sports park, and the new city hall civic center, as well as other city construction projects.

As president, Bernie was responsible for bringing the “First Sunday” free concerts to the community. He also organized free piano lessons at the library for several stu-dents and worked with the library to develop after school programs.