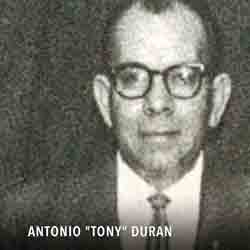 Tony Duran was born in Kansas and lived in Vista for 56 years. He operated the construction firm of Duran & Duran with his brother, Luz, who is also a Hall of Fame member. Tony was very active in civic affairs. He served on the Vista Unified School District Board of Trustees from 1961 to 1969 and was president for five years.

He was one of the founders and a member of the first board of directors of the Vista Boys’ Club, now the Vista Boys and Girls Club. He also served on the committee that was re-sponsible for the construction of the club building. He built a day care center for developmentally disabled children (a Vista Rotary project).

Tony Duran was a member of Vista Rotary Club, with perfect attendance for 30 years, and was president from 1956-57. He received the Governor’s Trophy for most out-standing club in the district. He was a member of the Vista Elks Lodge (20 years), and Honorary Life Member of the Vista Hispano Club. He was also a member of the General Apprenticeship Board of Palomar College from 1952-57, representing business management. In 1955, he received the National Red Cross award for Life Saving, signed by President Dwight D. Eisenhower.

In 1959, Tony organized the North County Building Contractors’ Association. In1960, he received the "Citizen of the Year" award. He also was responsible for a school and addition to an orphan-age in Mexico. He founded Vista High School Panther Boosters Club and the Palomar College Boosters Club. He was appointed to committees by both the Vista City Coun-cil and the Board of Supervisors.