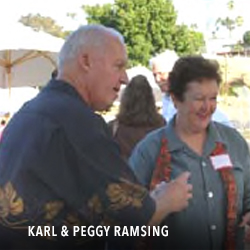 Karl and Peggy Ramsing are longtime Vista resi-dents that have contributed to the community in many ways. Karl was in the Navy and Naval Reserve for 24 years. He was a pilot for American Airlines for 29 years. Karl served on the Park and Recreation Commis-sion from 1971-1978, most of those years as Chairman. He served on the Sales Tax Oversight Committee from 2007-2010.

Karl has been active in the Friends of the Rancho for many years. He has been the lead person on refurbish-ing projects at the Rancho, including the total renovation of the tile mural from the Women's Club. Karl has also been the lead person on the barn project. He has spent many hours researching, drawing plans, doing layouts, meeting with experts, getting estimates, visiting barns, etc. He is an excellent woodworker and has been in-volved with Palomar College Wood Shop.

Karl Ramsing has been an active member of the board of the Friends of the Vista library for the past 5 years. When he first joined the board he represented Vista at the county library meetings for our then president, Bernie Rappaport.

The board has long wanted to improve the look of the entrance to the library. Karl and Peggy have long been active with the city arts development. Karl took on the lead of the Friends of the Vista Library Art Committee for the beautification of the Library project. He coordi-nated all tasks related to getting the mural at the entrance of the library completed. The mural is by Kait Matthews, former owner of Art Beat on Main Street, and her helper, Brett Stokes.

He is working with the mosaic artist, Cherie LaPorte, for the pillar completion and working with the Randalls, who are the bike rack artists. He was able to get donation of rocks for the concrete edging at the entrance. He attends the City of Vista meetings regarding the permits required, setting up installa-tions and coordinating the actual work at the library.

In addition, over the past few years, Karl has volunteered for the Friends of the Vista Library Encore Bookstore, by sorting and pricing books that come in as donations. Karl was selected as the volunteer of the year by the Vista Library. As a personal hobby Karl is active in Packard car club and remodels vehicles. He has donated his remodeled Packard for the Vista Christmas Parade and other community events.

Peggy was a key community member in moving forward the Wave Waterpark construction. Peggy did research and pro-moted the project throughout Vista. Peggy served on the 1974 General Plan Committee and on the Planning Commission from 1974-1981. She served on Vista Visions 2000 in 1990-1992. Peggy has been instrumental in most all of Vista's public art projects. It was her idea and follow through that made murals along the Sprinter line possible. Peggy has been active in the Vista library over 25 years.

Peggy has been instrumental in Vista's arts community. She was one of the first members on the Arts Commission serving from 2003-2013.
She took the initiative and compiled a list of all artists in Vista. This list lead to the development of many of the art projects in town, including the Vista Arts Foundation and the downtown art gallery.

They attend and contribute to many city meetings. They are also very involved in their church. They are both health advo-cates. Karl and Peggy love Vista and have stayed active and involved for years giving of their time and resources. The Ram-sing's have lived in Vista for over forty seven years. The City Council named them "Persons of the Year" for 2016 for their in-volvement in promoting art in Vista.