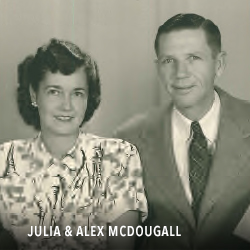 Julia McDougall graduated from Oceanside High School. She was Miss Vista in 1929, and married Alex in 1933. She started a school of dancing in North County, including Temecula and was very active with Girl Scouts, serving on the Board of Directors in North County for 10 years. She was awarded the highest honor in Girl Scouts in 1973. She was a PTA President, founder of the Vista Women’s Club and a member of PEO Chapter in Vista. She helped organize several town functions such as the Old Timer’s Picnic in 1967.

Alex McDougall established McDougall’s Pharmacy in the Granada building on Santa Fe. He bought a building in downtown Vista in 1929, where the pharmacy moved to. He was very active in the community and was a member of the Vista Rod and Gun Club, Vista Volunteer Fire Dept(1920’s), member of the Rotary Club, president of the Chamber of Commerce (1936), President of the Vista School Board (1945-55), member of the Mason’s 1948, installed as Master. He also served on several bank boards, such as the First National Bank, Liberty National, and Chartered Bank of London. He was also the town photographer at one time.