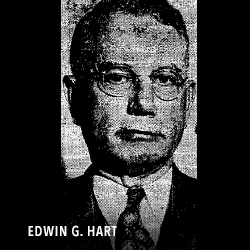 E. G. Hart was born in Cleveland, Ohio to John, a Civil War veteran, and Emma Hart. The family moved to California in 1884, where John Hart grew grapes on 40 acres in the Sierra Madre and was prominent in professional music circles. Edwin had two brothers, John, an attorney who served as Acting District Attorney of Los An-geles, and Frank, an accomplished pianist and man-ager of the Southern California Music Company.

After being in the mining business in Mex-ico, E.G. Hart went into land development in Southern California. Mr. Hart was the leading developer of Cali-fornia’s expansive avocado industry. His avocado and citrus fruit developments had a large part in creating La Habra Heights, Vista, and North Whittier Heights. The city of San Marino, near Pasadena, and its school system were organ-ized many years ago, largely due to Mr. Hart's vi-sion and perseverance.

His first avocado growing experiments were carried on at San Marino after which he developed 1700 acres and the first hillside terraced orchards at North Whittier Heights. Then 3600 acres were de-veloped at La Habra Heights and some 2200 at Vista.

Water and road system developments were followed by plantings. Mr. Hart had also developed probably the largest collection of hibiscus in the State. He was a past president of the Los Angeles Realty Board, first president of the California Avo-cado Association and an organizer of the Calavo Growers of California. He was also a Los Angeles Chamber of Commerce leader and interested in the welfare of many agricultural industries.

He was killed when he was struck down by an automobile on East Olympic Boulevard in Los Angeles, on Dec. 6, 1939. At the inquest, the fatal car's driver was exonerated after the widow had asked that he be absolved of blame due to the glar-ing lights of many cars and to the fact that the new boulevard had not been lined off as yet.

Sources include The Vista Press 1939, A History of Vista by Harrison Doyle, and Edwin Giles: Vision of a City Founder by Linda Molino PhD. Published in the Winter 2017 issue of The Grapevine by the San Marino Historical Society.